In my dream, I'm waiting next to my car. I'm waiting because some people that I've never met want to borrow it. In my dream, it made more sense why I was waiting and how this whole borrowing thing worked - maybe it was some variant of Flexcar of something.

A family shows up to pick up the car and I ask them if they don't mind dropping me off nearby. I explain that I would be grateful if they helped me although I could manage either way. They seem congenial enough and agree to take me. We climb into the car, I get in the back seat with the kids and the mother while the father sits in the front - on the passenger side. No one gets in the driver's seat.

Then, the car starts driving.

I get suspicious. Mainly because the car is diving but no one is in the driver's seat.

The father is sitting on the passenger side and smiling contently. The whole family sits calmly while the car drives itself. It takes me a moment to realize why all this is happening but I come to the obvious conclusion fairly quickly. These people are aliens, not humans at all. To test my theory, I say a couple things in alien.

In a buzzy insect-like alien language:"What are you doing? That's right, I speak alien and I know you understand me."

Now, they start to glance at each other nervously.

"Look", I say, "I know you're aliens. That's fine. But don't you realize that when you drive a car someone is actually supposed to drive the car? You can't do it like this, you'll get pulled over. You people are so bad at this. Where did you learn about humans anyway? Seriously, if you get caught it'll be straight to the alien autopsy for the lot of you. I don't even know if I want you to borrow my car now." 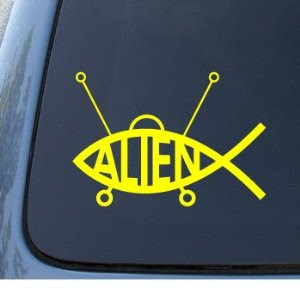 (image of alien fish via amazon where you can buy the decal if you so desire)
Posted by the unbeatable kid at 8:50 PM 2 comments