The Future is Retarded.

Picture Of The Day

There must be a sale on ladies pantsuits across the street.

(via myconfindspace)
Posted by Recon at 2:00 AM 0 comments

(**statement can be replaced with "defy social norms", "gain attention from the authorities", "cause anxiety for friends and guardians", or "resemble a husky robot" for equal effect.)

(***simplicity is conditional. It is dependent on the acknowledgment of the Slim Suit™ user that potentially destroying one's life is simple.)

(via Everything is terrible)
Posted by Recon at 1:24 AM 0 comments

Picture Of The Day

I had heard the rumor that Walter Matthau and Charles Bronson had a distant cousin from rural West Virginia but refused to believe it. I'm man enough to admit I was wrong.

The guy is dressed like me..circa July 1986. All he needs is a Sunkist and a miniature American flag and he's a dead fucking ringer for me at 7 years old rocking out little kid style at the state fair with my cousins in New Hampshire.

Did adults actually dress like this in the 70's? How many cocaine sandwiches do you need to eat in order to make the conscious effort to dress up like a Bay City Rollers guitar tech?

He's looks like the cool uncle who smoked grass and owned a gun (that some thought was a pedophile) after he just finished playing badminton with his hyperactive nephews in the basement during a heat wave.

But still..the baby petter look really confuses me. Just look at that lady. She's wicked 70's hot. Pedo-stache or no pedo-stache: his pimp hand is strong.

L.A. described by several famous Assholes who live there

I live in NY. No direspect to anyone reading from Cali, but I can't fucking stand L.A. I keep Haterade on hand just in case I have to swig it at the slightest mention of the perpetually beautiful weather and sunny beaches. Fuck you. I live in cold ass New York.

This captures several reasons why I have a violent physical aversion to Los Angeles. The title of the post from "Everything Is Terrible" said "Assholes talk about L.A." This video delivers the goods. Enjoy.

Bonus: a fresh faced Dave Hasslehoff dressed as a lifeguard waxing douche on the merits of L.A, immediately dating it and subsequently diminishing its social relevance.

(via Everything Is Terrible)
Posted by Recon at 2:20 AM 1 comments

That's How I Roll

Jesus! WTF, myself?!? It's been weeks. I guess it's true what everyone says. You are a dick, me.

Stupid. You've been a slacker as long as I've known you. Stop with the attitude, already. Your sass mouth is out of control. Recon, it's time. Get on that on-ramp. It's time. Put on your blinker and merge onto the highway to the dangerzone. Do it! Make Tom Skerritt proud. Blog it up, dummy. Before I stop talking to you.

Over the last few moons, God has struck me down with a severe case of writer's block (which is convenient when I'm in school for fucking writing) as well as a healthy dose of real life shit to deal with. My apologies. The robots need to hurry up and get invented already and I need to hurry up and win the World Series of Poker so I can afford to buy one and force it to blog for me when I am unable to fulfill my nerd responsibilities to the fullest. Grrr. Damn you 2009. You sound so futuristic but I still feel like a barbarian in the Dark Age. (It could be the warrior hair.)

Anyway, it's late and I need to make sure I make it to class on time (45 minutes late) tomorrow, so I'm off to the land of slumber where I commandeer alien laser battles and play guitar really good.

FYI: I'm going to blog the shit out of this place this weekend. You watch. In the meantime, please enjoy the best photograph in the Universe.

It's like Cocaine for eyeballs.
Posted by Recon at 2:44 AM 0 comments

Obama to Release the Truth about UFOs

Before you get too excited, let me just say the title of this post (besides being a dubious attempt to draw more traffic to this site) is based on a recent article by Dr. Michael Salla, a self described expert on exopolitics. The Obama administration has not thus far stated explicitly their intention to disseminate the truth about the aliens. But, those of us who can read between the lines know better.

Our new car smell fresh president Obama is engendering hope in the UFO community that the truth will finally be set free.

And, the US isn't the only country that's holding back the juice on our friends from beyond. India's recent refusal to reveal the UFO bases hidden on the dark side of the moon ranks them right up there with our North American shadowy puppet masters on the global conspiracy ladder. 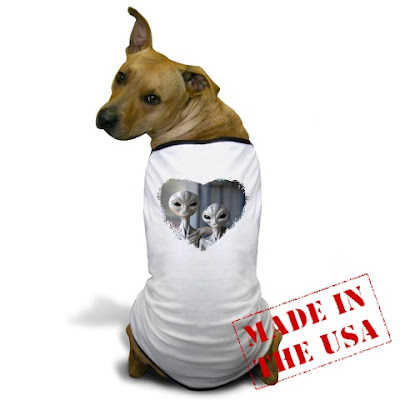 (you can buy a shirt with an alien couple on it for your dog here)
Posted by the unbeatable kid at 7:07 PM 0 comments 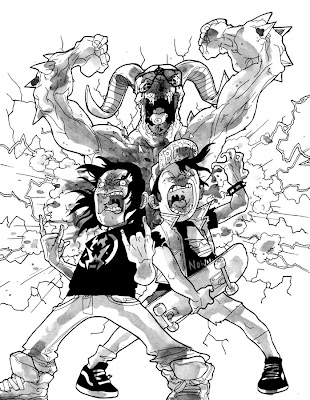 Since this is the inaugural "Black Metal Mondays" feature on my new site, I thought I'd give just a smidge of background before I get into the unbridled evil. Black metal is defined by wikipedia as "an extreme subgenre of heavy metal. It often employs fast tempos, shrieked vocals, highly distorted guitars played with tremolo picking, double-kick drumming, and unconventional song structure...Black metal has been met with considerable hostility from mainstream culture, mainly due to the misanthropic and anti-Christian ideology of many artists. Additionally, some musicians have been associated with church burnings, murder and/or National Socialism. For these reasons and others, black metal is often viewed as an underground form of music." As you can probably tell by that brief description, the more evil, misanthropic and anti-Christian the music is, the "better." Consequently, promotional copy for black metal bands tends to be a hilarious exercise in hyperbole of the most extreme sort (you might think that's redundant, but you'll soon see it's not). Since Mondays suck divine ass, and black metal as a genre encourages - nay, celebrates - such suckiness, I like to cheer myself up on Mondays by trolling my favorite black metal website for inspiration. So begins a (semi-)regular feature I like to call "Black Metal Mondays." Put on your dancing shoes and join me... 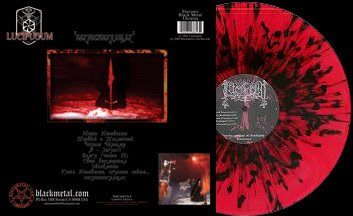 As you may have noticed, the economy sucks nate sack these days, so even 5 mics or 9/10 stars from Satan himself doesn't ensure black metal success in these trying times. So blackmetal.com is promoting some items from their back catalogue for a lovely post-holidays sale (just in time for Valentines Day!). First up on the hit parade is 1999's "On the Sortiledge of Christianity," the satin-smooth stylings from Lucifugum, a group of delightful chaps coming out of Zhitomir, Ukraine. Originally released in cassette format, Lucifugum have generously reissued this release on "blood spattered vinyl," which is great news for all you djs out there (you have not truly heard black metal until you've heard a killer doubles routine with Lucifugum's heartwarming ballad "When Hate is Burning Down the Sky"! Bboys rock the spot!). Their sound is described as "anti-dogmatic wolfish poison," and really, isn't regular anti-dogmatic poison just pussy shit compared to the wolfish kind? 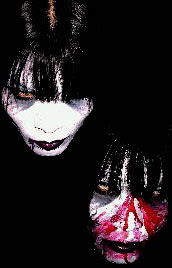 Our next discount offering comes all the way from Japan, not usually known as a hotbed of anti-Christian misanthropy and bloodlust, but, just as with compact cars and game shows and vinyl figurines, I am confident Japan will soon be the world's leading exporter of recorded despair. Endless Dismal Moan (or "E.D.M." as my parents know him) is a solo project from jinglemeister Chaos9, whose release "Lord of Nightmare" is tantalizingly described by revered critic "Weed B. Gone" thusly: "tension, bloody fury, drama and despair do battle using flesh-ripping thrash guitars and haunting piano melodies." If that hasn't got you adding Lord of Nightmare to your cart, dig on this amazingly cheery review by JoelH: "[Lord of Nightmare] is indeed a nightmarish occurrence. I honestly can’t say when the last time was that I experienced such a frightening, gripping, hallucinating, spellbindingly evil recording as this one. Seriously the riffs in this thing send shivers up and down my spine, the hairs on my arm standout up and quiver, and as I continue on listening I feel my very thoughts might betray me to do something wicked. Amongst these evil chords are brutally programmed drums that at no point sound human, but more like some sort of futuristic death contraption hooked up to my psyche. Plus with eerie synth that brings me back to the first Emperor album, and vocals that sound like something straight out of hell, you can bet you’re in for one tremendous journey with this recording." Check's in the mail, broh. (just in case the nuance is lost on you, please enjoy this sampling of E.D.M. set to some famous love scenes from classic American cinema) 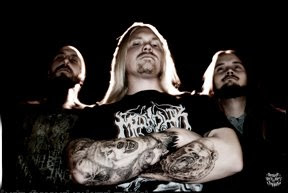 If the previous releases are just a little too "mainstream" for your tastes, then pull up a chair and start harmonizing with Through the Eyes of Carrion (formerly known as Slumber, which, given that word's possible non-evil nursery rhyme connotations, simply had to be changed). Metal Maniacs magazine says of their 2003 release "The Passing": "For those of you into more scathing and raw offerings of Black Metal, as opposed to the more commercial orchestral releases, check out Salt Lake City's most torturous project... Over the course of these... tracks, you will surely drop into a murderous trance...'The Embrace and Devourment' has blistering speed and the coldest, hollow vocals, letting you know you're in for a wild ride of traditional patterns, and high-powered machine gun drumming, interrupted only for segments of just as evil trance-like passages of noise-filled destruction. A consistent yet unique feeling approach to Black Metal, being straight-forward in anger and slightly infected with broken melody, not fixed on any particular band." My senior class picked "The Embrace and Devourment" as our class song, and I can confirm that there wasn't a dry eye in the house at the graduation! If you think Lucifugum is a bunch of studio gangsters, Through the Eyes of Carrion is the band for you!