Shampoo that Sells Itself 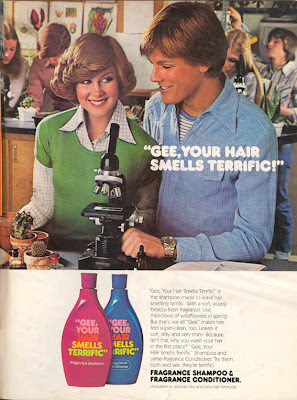 (Click on the picture to zoom in)
It's not hard to figure out why "Gee, Your Hair Smells Terrific" Shampoo isn't around any more. Someone incorporated a slang expiration date into the title.

The funny thing about this ad is that it's pretty much the same way that I met my girlfriend. Crowding up on her in science class and smelling her hair. It's a patented move of mine that no one thinks is the least bit creepy. That girl has a smile that says it all. And by "saying it all", I mean that it's actually saying, "I'm uncomfortable."

This idea should really have been extended to other products such as "Yes. I Am Gay" hair gel and "Ummm. I'm Not Gay" aftershave.